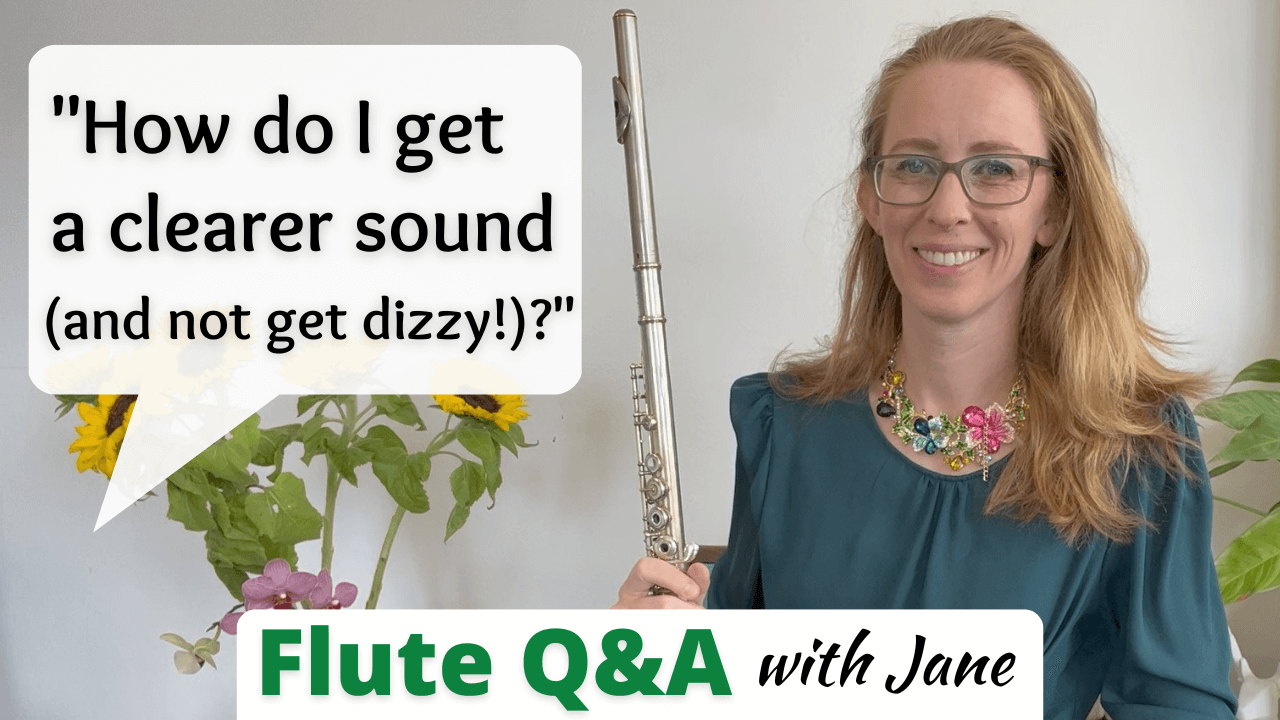 In Flute Q&A 41, this question comes from Kitty, who asks, not for herself, but for her granddaughter:

"My 10 year granddaughter is starting to learn the flute. The tone is fuzzy and she gets dizzy."

How to stop a fuzzy flute tone (and not get dizzy!)

Kitty, the free mini-course to fix an embouchure is here
And for anyone who wants to find out about joining The Flute Academy, more info is here for you

Welcome to Flute Q and A Number 41. My name is Jane. I'm a flute teacher. I'm Australian. I teach the flute. I teach people how making tiny little tweaks to their flute technique, to the way that they play instantly improves how good they sound and how good they feel when they play. So it makes it easier, in other words.

Okay, so first let's do our question from Kitty. She says, my 10 year granddaughter started learning the flute. The tone is fuzzy and she gets dizzy. Can you provide lessons for a beginner flutist? Kitty, a lot of people don't realize, and even some flute teachers don't realize, that if you have a fuzzy sound and you're getting dizzy, they are totally connected.

The fundamental reason, the foundation reason why you are getting dizzy and have a fuzzy sound is because the hole in your mouth is too big and that causes you to be breathing in too often, which makes you dizzy.

And it's only common if they're not actually taught to get the correct embouchure straight away. And as soon as they get into the habit of playing with a big embouchure hole like this. They'll be getting dizzy like I am right now. They'll have a fluffy sound that you can hear, and it's very difficult to get out of that habit without having a teacher that can specifically show them how to get a smaller hole in their mouth.

When they get a smaller hole, they'll end up having a clearer sound like this - It might be not that strong and clear straight away, but it will be probably halfway in between those two sounds. So clear, much clearer than when I had a huge hole.

So Kitty, a suggestion for you. If you have any knowledge of music or flute playing, you can go and do the free 3 day mini-course that improves your embouchure and you can pass this information onto your granddaughter, which improves your sound, which stops you getting dizzy. So I'll put a link below for you, but it's at www.flute.school and you can sign up there.

Anyone watching who would like to improve their tone or stop getting dizzy, you can have a look at that mini course. Now, Kitty. Okay,  it's almost time for our experiment. <laugh> Kitty,  you asked whether I can teach beginners. So in the Flute Academy,  it's for adults. It's for adults that are amateur flute players. So adults that can already play.

Now, they're not necessarily advanced players, but they're not total beginners. So that's two reasons why I think it would be best for your granddaughter for you to find her an in-person flute teacher. Actually, three reasons,  why I think your granddaughter should have an in-person flute teacher is because the Flute Academy is for adults. It's for amateur flute players, so they can already play.

And the third reason is that it's totally self-paced. So children need a lot more guidance like weekly at minimum guidance with a real human to keep them on track. Adults, they know what they're doing. They can use videos, they can have online content, online lessons to help them stay on track much more than kids are able to.

No dizziness with proper technique

Now, the experiment that I am interested in running here, it's not just a poll. I predict that no one, you can write other things in the comments too. I predict that it's impossible for someone to get dizzy when they play the flute but to have a great tone. Because those two things are totally linked. I believe it's impossible to get dizzy when you play, but have a great tone.

I just don't think it's possible because what causes dizziness causes a fluffy sound, which is too big a hole. Okay, so <laugh>, let's see. Put in the comments below which one is you. You can, like I said, you can write other things as well.

So that's my prediction. So I just don't think mechanically, like from a physical point of view, it's possible to have dizziness when you play, but have a really good sound.