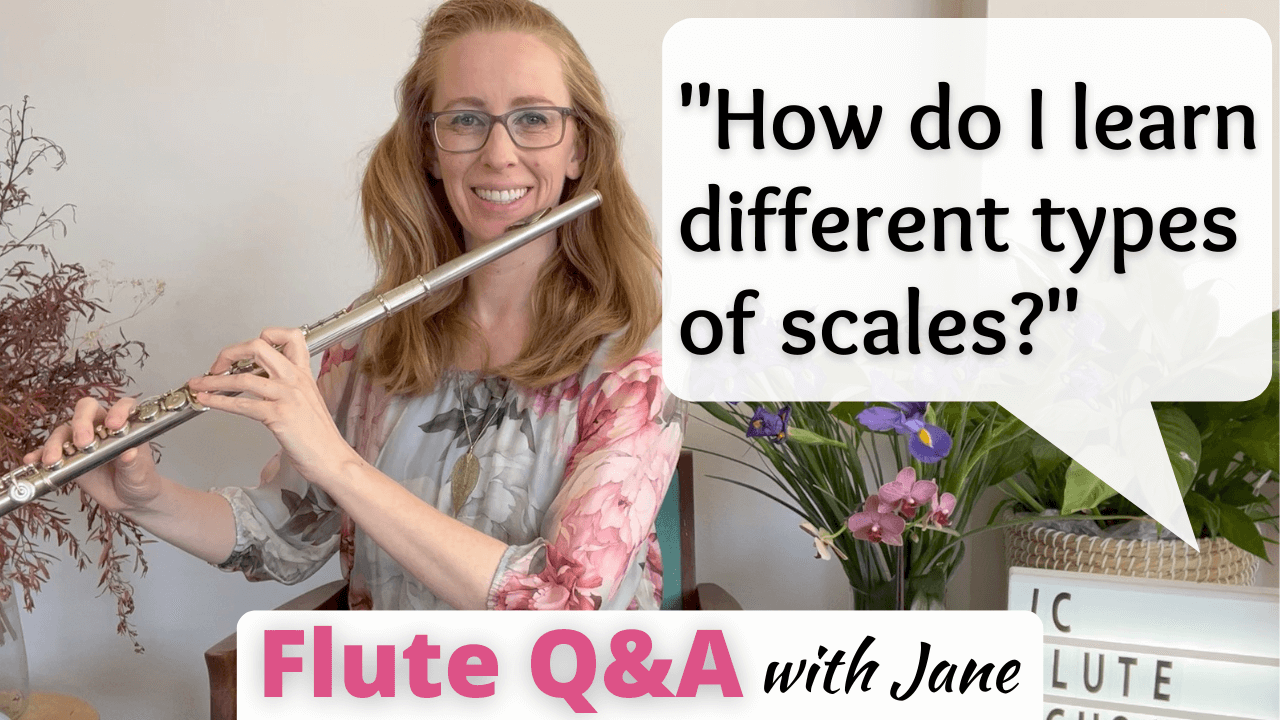 Flute Q&A #44: How to learn different types of scales on the flute

In Flute Q&A #44, today's question, asked by Diana reminded me of how important it is to make scales enjoyable and easy. She asks:
"What are the different kinds of scales for flute? I remember seeing one for Jazz."

It's a good question because there are loads of different types of scales for flute Diana!!

How to learn different types of scales on the flute

Diana, the link to the flute scales resource is here. Enjoy! It's a very comprehensive page on scales.
More info on joining me in The Flute Academy can be found here

Scales for the flute

Hello and Welcome to Flute Q & A Number 44. So this question comes from Diana and it's a great question about scales on the flute and where to find different types of scales. So my name is Jane Cavanagh.

I am a flute teacher. I live in Australia. I teach people the tweaks of proper technique. So making tiny little adjustments to your playing that instantly improve how well you play and how good it feels to play.

And they're like, oh my gosh, I can hold my breath. I can hold a note for longer or I have an instantly clearer sound or I don't get dizzy anymore or I can play high notes suddenly or my fingers can move suddenly faster. These are the sorts of revelations that students have in the Flute Academy when they join me to learn.

So Diana's question is, where did I see different kinds of scales? I remember seeing one for jazz. Okay, so I've got a great resource for you Diana. Have you heard of flutetunes.com? It's the most amazing website of  free flute music. They also have some good articles and one of the article - it's more a like a reference than an article, on scales.

Blues scale for the flute

So I'm gonna put that link for you below.  The link to that page on scales, including the jazz scales that you were talking about, which I'm thinking are probably Blues scales that you heard like this. This is a Blues scale. It's used in basic jazz improvisation.

So I'm not a jazz player, but these scales are very handy to start getting into jazz improvisation. So on that flutetunes page, you'll see that there's a link specifically for Blues scale. So that's might be the one you're looking for, Diana.

Now there are two ways that I practice scales. Sorry, I totally said the wrong thing. There are two ways how I teach scales. So one of the technique workshops inside the Flute Academy is how to easily memorize your scales, because that's one thing that students often think that they're having difficulty with.

The truth is, and I want you to think about this, Diana, when you're looking at this link that I have put for you below. The truth is that I actually don't want you to play the scale off the music and then try and memorize it.

You put the music away and then you play it with no music. So you actually learn it without music. And this is what I teach inside the academy as well. You'll find that really helpful because it ingrains the scales much more into your brain, your body, your fingers.

Now the second place where I teach scales is in inside the Flute Academy. There's a course called the 45 Day Flute Transformation. There's a module in there in that course called Faster Fingers. One of those lessons is specifically about how scales can help you get your fingers faster.

It's not the main reason, the main way. And you would know if you've done the 45 day flute transformation, you'll know exactly what I'm talking about. It's removing tension from different parts of your body. Basically going through an identifying tension in your body, releasing that tension, and then your fingers kind of magically move faster.

Lifetime of Scale sheet for flute

Once they're moving faster, then we get onto the scales and I give you a sheet in this course called the 45 <laugh>. I don't know why I said that. It’s called the Lifetime of Scales. What are these phrases in my head? The Lifetime of Scales sheet. And it's basically lots of different types of scales and I teach you how to play them as well in this lesson, in the course.

The reason this is an interesting sheet is because it gives you an order in which I teach scales, not just major scales but different types of scales. An order in which to learn it, which is going from the easiest to the hardest.

There's a little bit of flexibility in there, depending on whether you find high notes difficult or high notes easy. But it's an order in which to learn it, and it's the order that I teach my students and it works like a treat, learning your scales in this order.

Cuz it's not necessarily from no sharps, no flats to seven sharps and then seven flats. There's back and forth because some go higher than others. Anyway, I'll put a link to the Flute Academy in case you're interested in checking that out. So Diana, some more examples for you. Blues Scale, which I played you already.

Another jazz one that's used in improvisation is a Mixolydian scale. It's like a major scale with a flat seven. So if we, let's say we play G Major. G major normally has an F sharp that's the seventh note, and we turn that into an F natural instead of a sharp

It's called a Mixolydian scale. Another one that's used in jazz quite often. There are lots of things used in jazz but another one that is used in sort of getting into improvisation is a Dorian mode scale. And a Dorian, you can think of it like a, let me just work out how to describe this. It's like a minor scale.

So if I start on D, it's kinda like D minor but without the B flat, which is the sixth. So it's like a raised six, and then you don't raise the seven. So we have all naturals starting on D.

Diana, you'll find a link to these types of scales that I mentioned. So the Blues scale, the Mixolydian and the Dorian in this link that I'm giving you below and you can investigate further. Just remember to work out how they're constructed and then learn the scale without music. It’s way better, way better if you're playing, if you do it that way.

I'd love to know people have different favourites. I quite like F sharp major. It's got six sharps. I don't know why. It just feels nice, feels nice under my fingers, just as a nice balanced feel.

So I'd love to actually know what your favourite scale on the flute is. If you're on YouTube, put a comment below and I'll see you in the next Q and A. Bye.