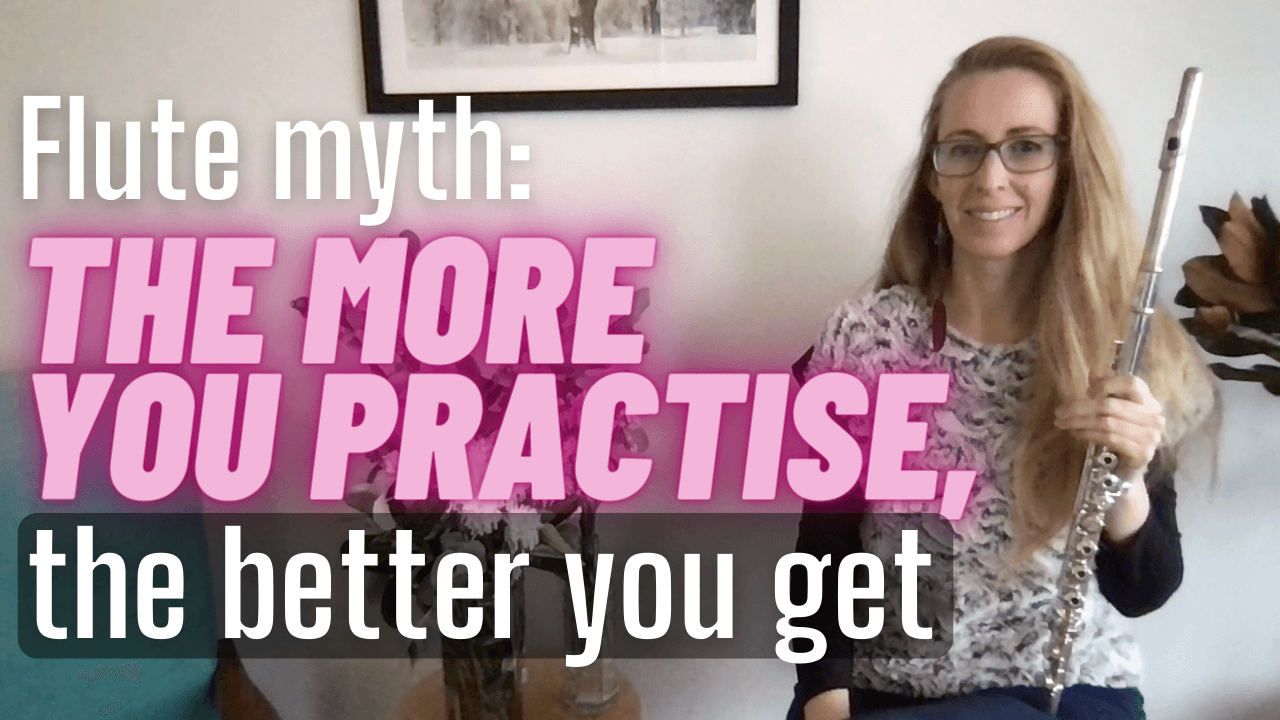 Flute myth: The more you practise, the better you get (and why it is false!)

Have you ever thought (or been told by a teacher) that you just need to practise a lot more? This is the number 1 myth that is commonly believed by adult flute students!

Flute myth: The more you practise, the better you get (and why it is false!)

Here's why it's wrong: If you're practising the wrong way, you're just going to teach yourself a bad habit that slows down your progress. Here's what to do instead to speed up your progress.

I'm gonna tell you in this video why this is a myth: The more you practice, the better you get. You've probably heard it and it's not true. It's actually not true. So my name is Jane Cavanagh and I'm a flute teacher. The way I teach is teaching people through proper techniques so that they get faster progress. And I never ever tell my students, you just need to practice more. So if you ever heard that from a teacher or you've told yourself, you just need to practice more. There's a bit more to the story. All right. So let's dive into it.

So firstly, I understand why you might think that the more you practice, the better you get, but have a think about it. Have a think about the best flute players or musicians in the world. Do you think that it's the only thing that got them there? Is the number of hours that they practiced? If you are thinking that all you have to do is practice the same number of hours as them and you'll be as good as them. Somewhere deep in your mind in your brain you know, that's not true. So it's not about how much you practice.

The other reason why a lot of people tend to think that the amount that they practice is what makes them good is that we're used to working hard for things. So when we're at school, when we're at Uni, we get told that you need to study. You need to, you know, the equivalent of practice to get any good. And it is true to some extent because obviously people that are really good at the flute had to practice to get there. But not everybody that practices that much gets that good. So there's a disconnect somewhere.

And the reality is, that disconnect is that it's not the amount of practice that somebody does on the flute to make them good. It's how they're practicing. Specifically it's the technique that they're practicing. Now I'm sure you have had the experience of somebody teaching you something the wrong way. And later on, you're like, why did they teach it? Teach it to me like that it was wrong and it confused me. And I've been doing it wrong the whole time. Whether that's someone teaching you something in an office or in another part of life and you look back and go, man, they really didn't know what they were talking about. They taught me the wrong way.

Well, it's the same with flute playing. If you get taught something the wrong way, or maybe you don't get taught something at all, because you're teaching yourself. If you then ingrain that as a habit, you're gonna be doing it the whole wrong way. And no matter how many hours you practice,  no matter how many hours you practice, it can be a million hours. You will not be able to overcome that fundamental technique that you've taught yourself or someone has taught you incorrectly.

It's only by learning real proper flute technique, the little tiny adjustments that you make that will get you over that hump to be able to then progress further. Here are some examples for you.

So if you don't have the correct embouchure when you play, so the shape of your mouth, the size of the hole in your mouth,. If this is not right, it doesn't matter what you do. You won't be able to improve your tone.

Another example is if you simply blow harder for high notes, it doesn't matter what you do. There will be some high notes that you will never be able to blow hard enough for, to be able to get. And what you are missing is the little tweak that you really need to make to your embouchure  that I call the real way of playing high notes to get you over that hump of not being able to play high notes and make high notes a breeze.

Another example is if you've got slow fingers on the flute, there's a reason for it. And it's generally not coming from your fingers. Our bodies are full of tension if we haven't been taught how to identify and isolate that tension and let it go. It's not just your hands that are slowing down your fingers. It's your whole body. And if you don't know where to start and you just try to force your fingers to go faster and faster, you'll probably end up thinking something like, I'm not cut out for this.

The reality is though, you just haven't learned the, the adjustments or the tweaks to make to your technique, the way you physically play the flute, whether it's your body or your face, your mouth that are the fundamental skills you need, like the building blocks to be able to then excel beyond that.

So then have a think about this. I'm just thinking about you and the future of your flute playing. Just every time you feel frustrated with your playing consider that maybe it doesn't have to be like this.

Just start to consider that every time you feel like you're spinning your wheels with your flute practice, that you're practicing a lot, but not really getting anywhere that the problem may not be you. The problem may be that you are missing something.

Adjustments to your flute technique

It's not about the number of hours that you practice. Of course you need to practice these techniques into your playing, but it is not. Your progress is not directly proportional to the amount that you practice. In other words, you can get faster progress by learning the right way, the real way to accelerate your progress.

If you'd like to find out more about how I teach and what you can learn in the Flute Academy. And that's my program where I teach flute players faster progress through proper technique, come and have a look at www.flute.school/academy. And you can read up more on it.

By the way, I haven't played flute for you today. So if this is the first video you've ever seen of me, did I say my name is Jane Cavanagh? I think I did at the start. Here's some proof that I can actually play the flute instead of just talk, that sounded flat. It's because it's freezing in here today. This is Sydney in the middle of winter and it's cold.

Come and have a look at the flute academy, www.flute.school/academy. And you can read more there about what you can learn about proper technique. See you there.