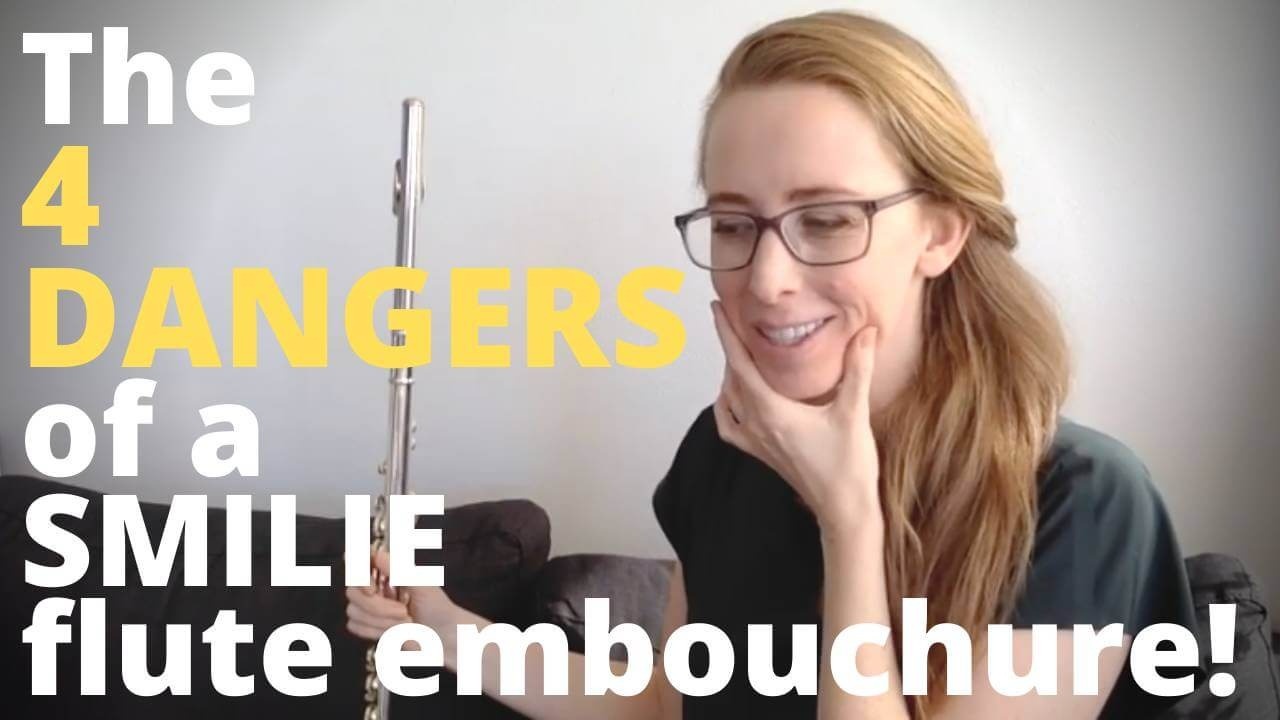 The 4 Dangers of a "Smilie" Flute Embouchure

I want to show you how having too tight a mouth when you play the flute leads to 4 particular problems:

The 4 Dangers of a "Smilie" Flute Embouchure

I made you this 5 minute video to DEMONSTRATE each of these 4 problems.

I have a feeling you will relate to at least one of them!

I'm going to show you right now, the dangers of having a smiley embouchure when you play the flute like this. See that smileliness. I almost called this video, "The danger of having squeezy cheeks when you play the flute". There are four main problems with having a smiley embouchure. When I say problems, you'll see what I mean.

But first I am Jane. My surname is Cavanagh and I love showing people the absolute fundamental techniques of playing the flute. Because when you learn these tiny little changes, these technique changes to your playing. It makes a massive difference to how well you play. Sometimes these changes are instant. And it's my favourite thing about teaching.

When a student goes, oh my God, I have been working on that for a year and I've never been able to do that. And then they can get it in one lesson. That's why I love teaching the fundamental skills. Speaking of fundamental skills, stick around to the end of this video. And I'm going to show you how to quickly improve your tone on the flute and quickly change how easily you can play high notes.

Example of smilie embouchure on flute

But right now the four dangers of a smiley embouchure. I’m going to demo each one so that you can really see what I'm talking about. If you pull back the corners of your mouth when you play into a bit of a smile, when you play high notes, they're going to sound screechy like this. And they're gonna be super sharp.

A great example of how smiling really messes up your playing overall is when you're playing along and someone or something makes you giggle or start to giggle and you feel the smile creeping in, and then your sound just goes when I was a kid playing in a youth orchestra, I used to be so envious of the violins and the cellos and the violas that they could smile. And they could laugh when they played. Cuz the moment that you'd laugh as a flute player, you are playing and your sound goes down the drain.

Sharp intonation on the flute

Danger number two is you're gonna be sharp all over the flute, not just your high notes like this. And you're also run out of air, but that's not even included in one of the dangers cuz there's way more than four, but I'm just going to show you four now.

The fourth reason why this is problematic playing with a smile is because when you are tight in your mouth, it makes other things tight. So if you are tight here, when I was demoing a second ago, I felt my eyes squeeze up. So I'm going to tighten my mouth by smiling. And it's it got tied up here. I dunno if you can see it. Compare that to how I normally play, which is like this. That was so when I played with the tight mouth, it was tight up here.

And what happens then is that that flows through you to your neck, through to your shoulders, through to your hands, makes your hands slow. Your fingers slow down, and tightens up the rest of your body, which means your breathing is going to become constricted. So tight anywhere. And today we're talking about your mouth leads to tightness in other places where you don't want it to be tight.

So you can see there's a lot of flow-on effect from one small thing, like a smiley or a tight mouth. That's just one example of a fundamental technique that once you fix it affects so many other things. So about your sound and about your high notes that I was saying, how to fix tiny little things of those.

Go to www.flute.school/free and come and join me in a masterclass. It's free online masterclass. And I'm going to take you through a few things that instantly clear up your sound by focusing on those fundamental skills and instantly makes high notes easier by focusing on one high note fundamental technique, which is the opposite to smiling. So I'm gonna show you how not to smile and how to actually play in a way that makes high notes easy and not at all screechy. So I look forward to seeing you there. Bye.