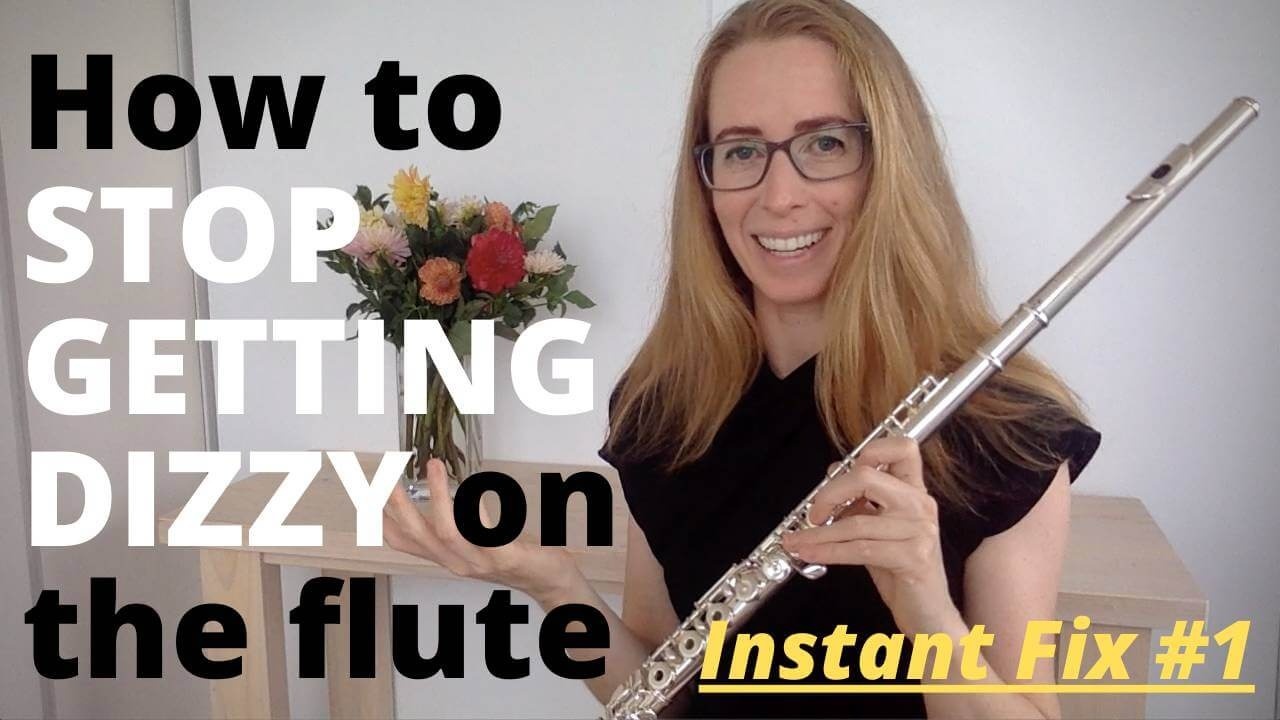 Instant Fix #1: How to STOP GETTING DIZZY

Getting dizzy feels awful! There are 6 reasons why you get DIZZY when playing the flute. And the good news? There are FIXES for all of them!

Tell me in the comments below which of the 6 causes fixed YOUR dizziness. (I'd love to know!)

I'm Jane my business, The Flute Teacher School, because I'm a flute teacher shows you a different way to get better at the flute. So instead of saying, you just need to practice more. I love showing people the exact solution that they need for their exact problem when they're playing the flute. In this case, it's how to stop getting dizzy. By the way, stick around to the end of this video, to learn How to Quickly Improve your Tone on the Flute, how to get a clearer sound for free. It's part of a mini course.

Okay? The six causes for you getting dizzy when you play the flute.  Number one is that your embouchure the shape of your mouth is too big when you play. If your hole is too big, when you play all the air escapes really fast and you need to breathe in a lot, which makes you dizzy. Too much oxygen. So this is a good size embouchure hole. And this is too big. If I did that three times over, I would be very dizzy.

Number two reason why you get dizzy when you play the flute is your embouchure is the wrong shape. One is if it's too pulled back, so too tight and too wide like this, this is too wide. You're gonna have air escaping outside each side of your mouth. And when you waste air, you need to breathe in more frequently, which makes you dizzy. Now the opposite is if your mouth is too round like this, that makes the hole too big, which you know, from the last point uses too much air. A good embouchure is fairly relaxed, not too tight, not too pouty like this.

The third cause of getting dizzy is if you are blowing in the wrong direction. When you blow across this hole, this embouchure hole, your airstream needs to be hitting that opposite edge of the hole and the air will split. So you should be aiming for that sharp edge on the other side, that's what actually makes the sound. So if you are missing that edge and you're playing too far out, say, or too far in. Your sound's going to be funny, but more importantly is that your air is not going to be used efficiently. And when that happens, you're gonna be needing to breathe in more often, breathing too frequently and getting dizzy.

The fifth cause of getting dizzy is even if you have all of that, what I've said under control, you embouchure is good. You are blowing the right direction. You're not blowing too hard. If you breathe in too frequently, just out of habit, same thing's gonna happen. You'll get dizzy. So for example...

And the sixth thing that makes you dizzy when you play the flute is when you play high notes, not having control over your embouchure. If you don't have control over your embouchure for say the top half of the range of the flute, you're going to be getting those high notes by blowing harder, not by having control. If you blow harder, like you now know, you need to breathe in more frequently, which means you get dizzy.

That control that I am talking about over your embouchure is such a subtle movement. It's such a tiny movement. You probably won't even be able to see it. That is a whole topic of flute playing how to get control over your embouchure, to get your high notes, to sound sweet and soft and not get dizzy when you're doing that. That's a whole other area that we don't have time to go into in this video.

So there you go. They were the six causes of getting dizzy when you play the flute. So that free mini-course I was telling you about. It's called How to Quickly Improve your Tone on the Flute. You can get free access to that course. There's a link in the description of this video. Feel free to sign up. It's 10 short lessons about specifically how to clear up your tone really quickly. I hope you are getting less dizzy. Now go on practice those six things that I just mentioned, it'll make a difference. Bye from me.