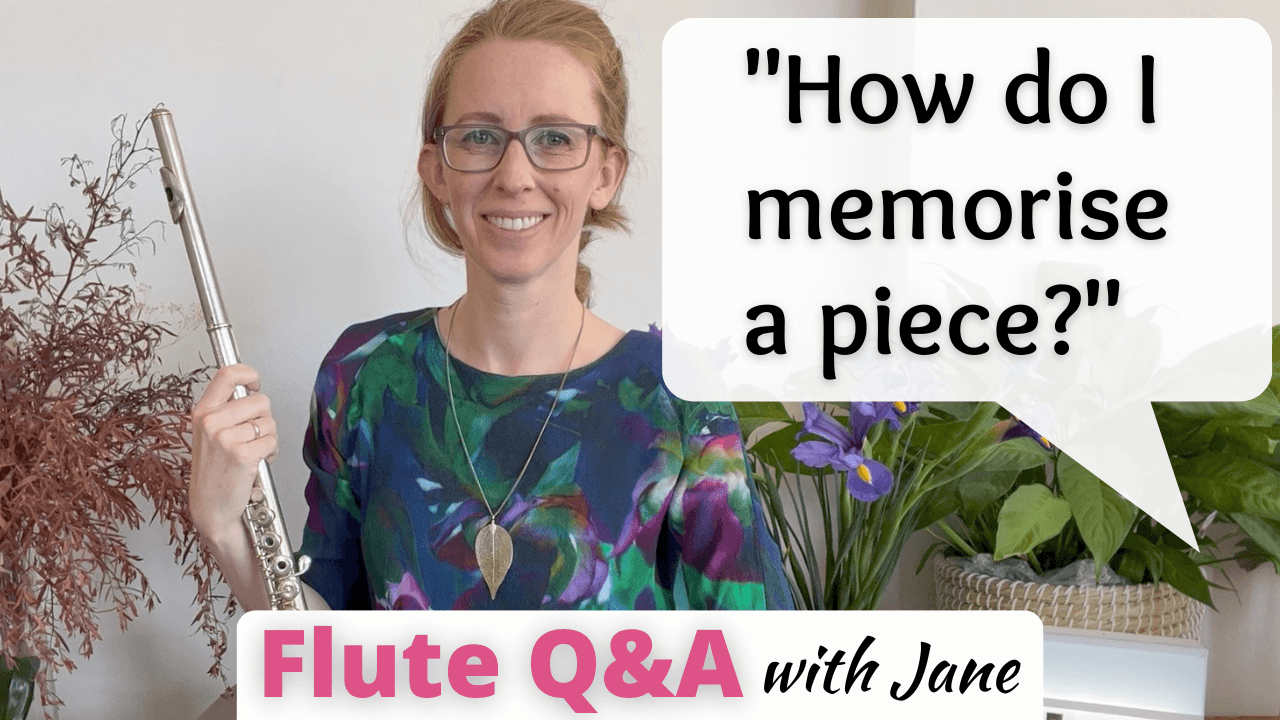 In Flute Q&A #43 Sam asks: "Do you have any techniques on memorising a piece of music? It always blows my mind when I see people play a large piece without sheet music in front of them!"

It used to blow my mind too Sam! Come and see the 3 main ways to memorise a piece.

How do I memorise a piece?

Sam, more info on joining The Flute Academy is here. It sounds like you're at a good level to join and get the most out of the program.

Welcome to Flute Q and A Number 43. This question is about how to memorize a piece, and I have a question for you about your experience with memorizing pieces in a sec.

Faster progress on the flute

Okay. So, oh, my name is Jane Cavanagh. I am a flute teacher and I love teaching people, proper technique that gets them faster progress on the flute. So often it's the tweaks of how you play the flute that make playing the flute easier, and it's the tweaks that you wish that you'd learnt when you were well, a beginner, basically, whether that was when you were a kid or when you're an adult.

Sometimes people miss out on the foundational skills and it makes playing so much easier when you learn them. That's what I teach.

Techniques to memorisation for flute

Okay, so the only question comes from Sam, do you have any techniques for memorizing a piece of music? It always blows my mind when I see people play a large piece without sheet music in front of them.

Okay, the first thing to say about that, Sam, is that it blows my mind too. <laugh> when I see someone play a really long piece. I have memorized long pieces. So, for example, the Mozart flute concerto, I think it was the one in D, no, maybe it was G. Anyway, I can't remember which one it was.

It's funny that you brought up this question, Sam because the very first technique workshop inside the Flute Academy is about how to memorize your pieces. It's a 20-minute workshop specifically on how to memorize pieces. A little something to point you in the right direction. Basically, there are three ways. So visually, orally, and finding patterns.

I know people who have done things like use different colour highlighters to make it visual. Personally, that hasn't worked for me. I mean, I've tried it. I am a visual learner but when it comes to music, I'm very oral-based and patterns based, especially.

Listen to the flute piece

The biggest tip I can give you for learning to memorize a piece is to listen to it loads, and be able to sing it. If you can sing it, you are on the right path to be able to memorize it.

So just be able to have it inside you, orally be able to sing it. It's just so part of you that you could sing it, even if you can't, you know, sing a flute concerto. Sometimes they're a bit difficult to sing but at least you can hear it in your head.

Find patterns in the flute music

It's the reason it's the first one is because it's so relevant to so many people, so you're not alone in wondering how people memorize big pieces.

Now, I was just thinking about my little demonstration there of Mozart. I haven't played that for 10 or 15 years, and I feel like I did a terrible job at it. So I'm actually gonna pause this video, go get the music and play it for you properly so that you know that I can actually play the flute well.

So before I do that, I might ask you the question and then I'll go and play it for you. So the question, if you're watching this video, not just for you Sam, I would like to know what piece have you memorized on the flute that you are the most proud of?

So if you're watching this on YouTube, putting the comments below. The piece that you are the most proud of memorizing. I'd be really interested to know. It's different for every different level of where you're at.

So for example, I probably memorized a piece when I was a kid and I had three notes in it and I would've been terribly proud of myself, but for now it's the Mozart Flute Concerto. Okay, I'm gonna pause this, go play it for you properly.

Okay. I just went and found the music. I'd have to practice this for a solid couple of weeks to get the whole thing from memory again, but here's a little, a little taster of what Flute Concerto in D first movement, just a snippet sounds like. So this is what I memorized 10 or 15 years ago. When was it? I think it was 2008.

Luckily when I played that with an orchestra in back in 2008, by memory I played it better than that. I mean, it wasn't too bad. There was a couple of squeaks and dodgy notes in there.

But anyway, back to you. What is the piece that you are the most proud of memorizing?  Write in the comments if you're on YouTube below. It's been great to have you in this Flute Q and A and I'll see you in the next one. Bye.