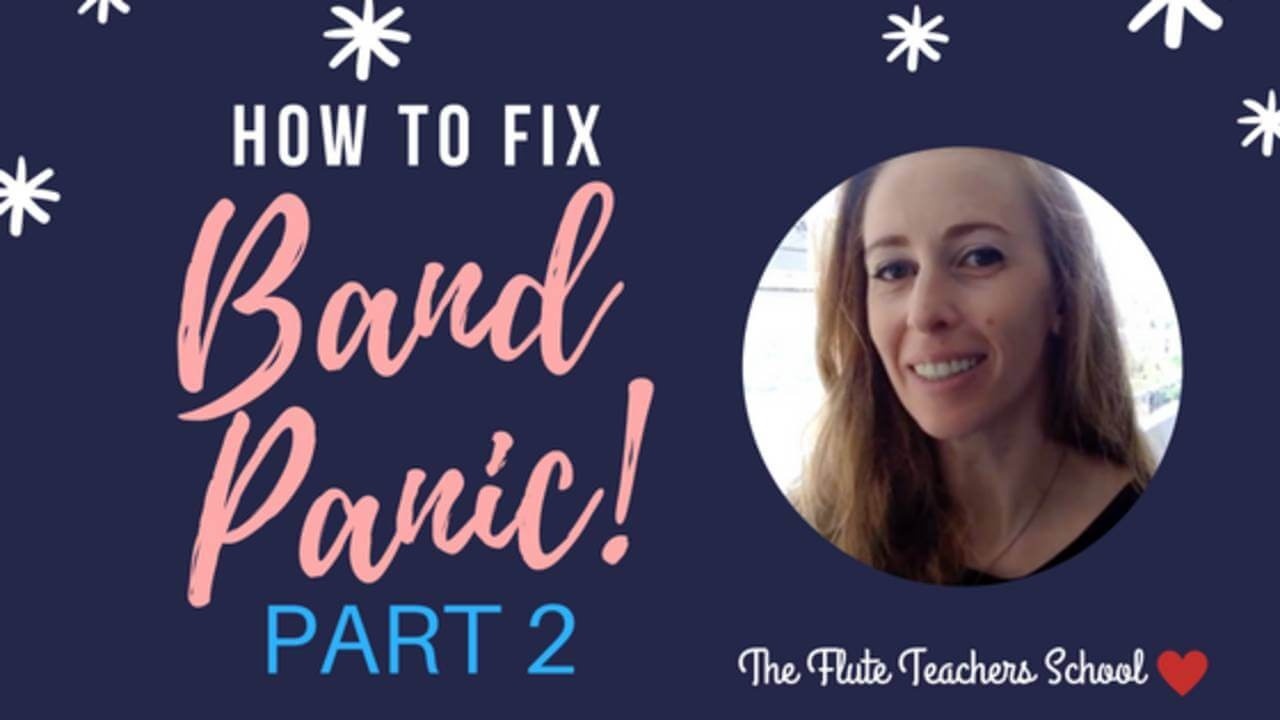 Got a student who crazily RUSHES through their pieces?

This is an intense 9 minute video. It gets right to the point of why a student rushes through their pieces and plays loads of mistakes!

And of course, it shows you how to fix the issue. It's not what you might think...

Do you have young students who rush through their playing so badly that they make heaps of mistakes? For example, something like this.

So that was pretty disastrous, but that's kind of an example. It doesn't need to be that bad, but if you sense that your student is rushing and making mistakes and you think it's because of playing in an ensemble a lot, like a school band that they're just not ready to be in. And the teachers, for example, have sort of pushed a whole group of beginner-ish or average-ish students into a band, given the music and just sort of thinking that throwing them in the deep end is a good thing but you know, as a teacher that the water is way too deep for them and that they need a little bit of just learning the fundamentals first before going into something so advanced.

Just recently, like in the last 12 months, I've discovered how to really fix these students. It's so bizarre like it's so obvious that I can't believe I haven't thought of it before. Most teachers would sort of go down the path and this is where I was coming from before is telling them to be careful, slow down, play the right notes, do it again, do it again, pay attention, go slower, stop rushing, that kind of thing. But the truth is they're not rushing. They're panicking. They're panicking that an imaginary band that they're used to playing with is gonna leave them behind. So when they play by themselves and when they practice at home and when they play in lessons, they're replicating how they feel in the ensemble. That is way too hard for them.

I've tried out this solution on a few students in the past few months. And I've gotta say it's like magic. It's so amazing. I think this new technique has come from being more experienced as a teacher and getting older. You get more sensitive to people's subtle emotions and pick up how they're feeling, which is extremely beneficial.

So the first student that I tried this on, her name is Emma. She is 11, about 11. She rushed through a piece, played like a bazillion wrong notes. And at the end, I said, you know, how did you feel when you played that piece Emma? She says, good. So they have no idea. They have no idea that they're panicking. It was so obvious to me that she was panicking when she was playing. And I think this was a great student to try it out on. And maybe without even teaching her, I would never have picked up on this way of getting them better. Cuz it was so obvious that she was panicking. Like she looked panicked, she played panicked. You asked her, how are you feeling when you play that piece, she says, good. The way I approached this with her because it was a little bit of experimentation. I thought if I can get her calmer, I think she's gonna play better.

So I said, you're playing by yourself now. You're not playing with the band. They're not gonna leave you behind. It's just you, nothing about, don't rush. It was all about getting her to feel calmer. I said I want you to play that again. And just to remember that you're playing by yourself. You can take your time. Take your time to get exactly the right notes. Slow is fine. Pauses are fine. Go at your own speed and be really careful with how you play this to get the right notes. So she played it again and it was better. It was probably like 25% better. I could see in portions, she was calm and then the rest she was panicking in. So that was excellent. That was really excellent.

Then I asked her how she felt in certain sections where I thought she was calmer. And you can see from her face that she felt better. She said she felt better. You can even ask them where they felt good. And see if it lines up with what you are thinking to give yourself a sense of whether you are on the right track. So then we played it again. I asked her to play it again. And I said I want you to feel calm like you felt in those few bits more through the piece. I said, just take your time. You're not gonna be left behind. It's just you playing carefully, carefully, carefully get the right notes. She played it again. And it was about 50% calm and 50% panicked.

And then I gave that to her for homework. I said this is how I want you to feel and approach it until the next lesson. So she practised it. She came back and it was like 90, 95% calm playing. And not only that, she played so much better, like so much better. It's crazy. So that's really awesome. But you should see her face. She was smiling and happy to be playing, not panicked to be playing. And that leads on more practice, more love of playing, and more attention in flute lessons. It just leads up, leads to a whole new thing. If you can get the student feeling great when they play and they actually like playing and it's not as stressful for them. And that practising is fun and enjoyable. You're onto a really good thing.

The last two weeks I was filling in for a teacher. I did 20 students for two weeks. Actually, she got a job in an orchestra in New York so she went over to suss that out. As an aside, check the names of these students. Out of 20 students, Annabella, Annabel, Isabella, Isabelle, Isabelle, two Lilys, two Graces, and two Sophias Wow. One girl, one of the Lilys, she's 9. She had the same issue when she was playing on the first week that I saw her. Oh, obviously I'm faking that a little bit, actually a lot. It's supposed to sound like this.

And I went through the same process with her. Talking to her saying just, there's no need to rush. You're playing by yourself. It's just, you go as slowly as you need, take your time to get the right notes, get exactly the right notes. Spend as much time thinking about the right notes as you need. It's just you playing. There is no one that's gonna leave you behind. The difference that it made to her playing in one week was crazy. You should have seen her face the second week. She was all smiles. She said that she played this piece to her mom and her mom said she sounded better. And I said, did you tell your mom why you sounded better? And she said, yes. She said I play better when I feel calm. It's so amazing. Like you might think that telling them to play slow, take their time, or pause between notes, you think it might ruin the peace or be way too slow, but it's like the other extreme of what they're suffering. They're suffering total panic of being left behind by an imaginary band. And if you bring them back to the other extreme, over time, they'll settle in the middle. The speed will be completely normal. It will be what they were trying to do in the first place. And without all the mistakes.

For Lily it happened in a week, for Emma, it's taken a few weeks. Being sensitive to how a student is genuinely feeling, not as unhappy or sad, but in this case, panicked. And then being able to alter that is an incredibly powerful thing. Try this out on any of your students. It's amazing. Like seriously amazing. If I was going to pick one thing from this year of teaching that I would say I was really proud of, like the development in my own teaching technique, it would be this. It's just remarkable is the word. So I kind of hope that you've got some students that have this problem so that you can try this out on them. That's a terrible thing to hope for. But you know still, there are students out there that have this problem. So I hope you've got some of them so that you can fix them and make them feel a lot better about their playing and play better.