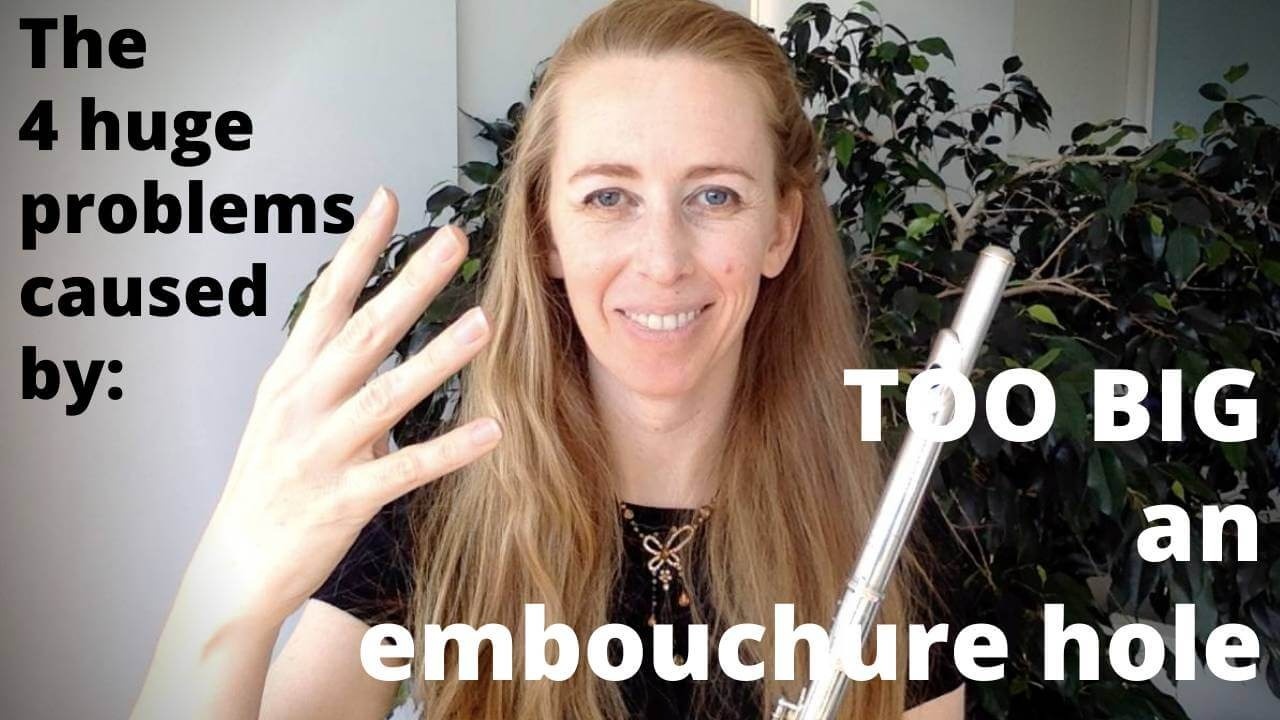 I bet you've never thought of this quite like this before...

FACT: If you have too big an embouchure hole (the hole in your mouth), these 4 dramatic things will happen.

The best thing about having such a clear cause and effect, is that you can fix the problems really easily (because you know what to fix!)

I get pretty excited showing you the effect, because I LOVE being able to quickly fix someone's flute playing, and the video gives you a bit of an insight into how I teach.

How to improve your flute embouchure

I'm going to tell you in this video, why playing with a small embouchure hole,  that is the hole in your mouth is an essential part of playing the flute. Well, if you play with a big embouchure  hole, or even if it's slightly too big, these four things are going to happen to you. You will not be able to play high notes. You'll have a fluffy sound all over on the flute. You will run out of air and you'll probably get dizzy. Let me explain in just a minute.

Firstly, I am Jane Cavanagh from the Flute Teacher's School. I love showing people how little changes, like getting a smaller hole in their embouchure make a massive difference to how well they can play the flute. And if you want to know more of how to get a good sound, come and join me in a masterclass that shows you just that. It's free and I'll tell you about it at the end of this video.

So back to a small opening, a small embouchure hole.  I'm going to give you demonstrations of those four things that will happen if it's not small enough. Firstly, you won't be able to play high notes. I'm going to give you a demonstration. I'll go low to high with a small enough hole and the high notes will work and then I'm gonna do it with a bigger hole and you'll see that it just falls flat. So here we have an  embouchure , a hole that is the right size. So small enough. So that's fine.

Run out of air quickly with incorrect embouchure

Now I'm going to open up that, up that hole just a little bit. And those high notes are not gonna work very well at all. Well actually they worked kind of okay, but I ran out of air. I'll get to that in a second. Now I'm gonna open up the whole even more and more of those high notes won't work. So there you go. That's pretty dramatic. So the second thing is that you run out of air and you saw that happen just then.

And the other thing I said is that it makes your tone fluffy. So have a listen. What I'm gonna do is start playing a long note with a small hole and then I'm gonna make the whole bigger as I go along the long note, you're gonna hear the sound change.

Fluffy sound on the flute

So I'll choose G. See that quickly ran out of air and the sound went fluffy. I'll do that on a low note and it won't drop down because there's nowhere for it to drop down to. But you're going to hear the sound, get fluffier and fluffier.

So I'll do a low G. Did you hear that change? Now if I do that to the high G, it's gonna completely fall apart very quickly. So I'll start with a small hole. So it just screws nowhere. If the hole's not small enough, you can see that it affects so many of the foundations of flute playing. So playing high, playing with a clear sound, playing a long enough note and the comfort levels of not getting dizzy.

So there you go. If you want to know more about improving your tone, it's mostly got to do with embouchure . Come and join me in a free master class that I'm doing. It's online, www.flute.school/free is where you can register. And I will see you there for more fundamental embouchure techniques that underpin the whole of your flute playing. Get this right and it makes playing the flute so much easier and so much better. See you there.