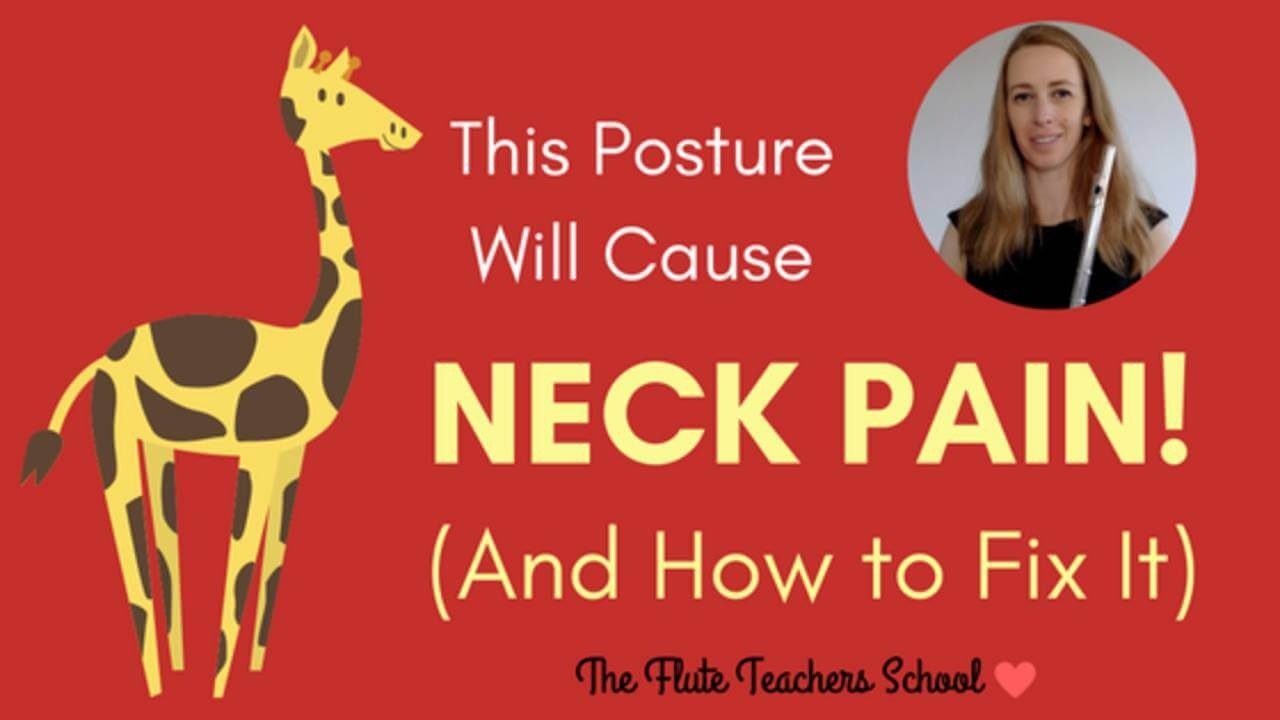 This Posture Will Cause Neck Pain (and how to fix it, of course!)

This tiny little (bad) posture thing is the cause of so much neck pain, shoulder pain, and not-so-great breathing. But it's so easily fixed! I show you in this video how to get rid of it in yourself, or if you teach - how to show your students how to never develop it in the first place!

There's this little posture thing that a lot of flute players do. And it often causes neck pain and shoulder pain. It reduces your ability to breathe freely and it affects your sound.

I'm going to show you in this video how to get rid of that in your own playing and if you're a teacher, how to stop your students from developing this bad habit in the first place.

If you haven't already done the free course on how to improve your tone - really quickly, stick around at the end of the video and I'll show you how to get that.

This is a tiny little concept that if you teach your flute student at the start, it makes a huge difference to the calibre of their playing. I'll give you an example. If you don't teach them this, they will be a student who plays like this...

If you DO teach them this, they're going to play like this...

So you probably figured out what's going on. One person sticks their head forward and the other one has a nice sort of posture.
The way to teach them this is right from the start when they're using just the head joint. When they're getting a sound - when you're teaching them to blow, you teach them to bring the head joint to you. Instead of you going to the head joint.

Chances are you'll most likely see this kind of thing in beginners. They'll bring the flute head joint to themselves because you've told them about standing tall and keeping their posture up and then at the last minute they forget and they do this...

Just a tiny little bit. This is exactly what you want to remove. Have them think of a string coming out of the top of their head, feeling like a ballerina, up tall, and THEN they bring the flute to them up like this. You want them to not AT ALL stick their head forward - even the tiniest little bit.

It will creep into their playing. It will get exaggerated down the months and the years of when they're learning and, even though it's the tiniest little movement forward, it will turn into neck pain, shoulder pain, breathing problems.

And here's something to watch out for. When you put the whole flute together and you're teaching them how to hold the flute and play their first note on the flute, you will see this thing creep back in. It's because when the flute is together, suddenly it's this big overwhelming scary machine and they forget that it's, well, just a flute!

On the day that you teach your flute student their first note, as well as having a whole lot of things to remember about where to put their fingers, you're going to emphasise that the flute comes up to THEM.

It comes up to them, not the other way around. Remember that tiny little movement at the end that creeps into their playing will be exaggerated down the track in a really bad way.

I don't mean "bad" as in they're going to end up not being able to play the flute at all! You can very well get a very, very good flute player who has that little creep in and they WILL have muscular problems
So this is one of those little "nip it in the bud" things.

If you get this good in your student, then you're creating someone who just doesn't have this problem later down the track. When I've been telling students lately about them having a string coming out of their heads (this is for very beginners) - more than one has said that it sounds creepy that they have a string coming out of the top of their head! Which is true, I guess...

Oh by the way, it's really helpful to say this in the positive sense to a student. "Stay tall and the flute comes to YOU, not the other way around." As opposed to saying "don't stick your head forward".

It's so much easier and for them to learn and much, much, much more effective if you use the positive sense.

So there you go - a tiny little concept with huge results.

I'm Jane from the Flute Teachers School and what I just showed you is exactly the kind of stuff that I love teaching. Small fixes that make a massive impact.

So if you want to do the free course called How to Quickly Improve Your Tone of The Flute, then you'll see a link on this page where you can sign up. I look forward to seeing you in that course if I haven't already!