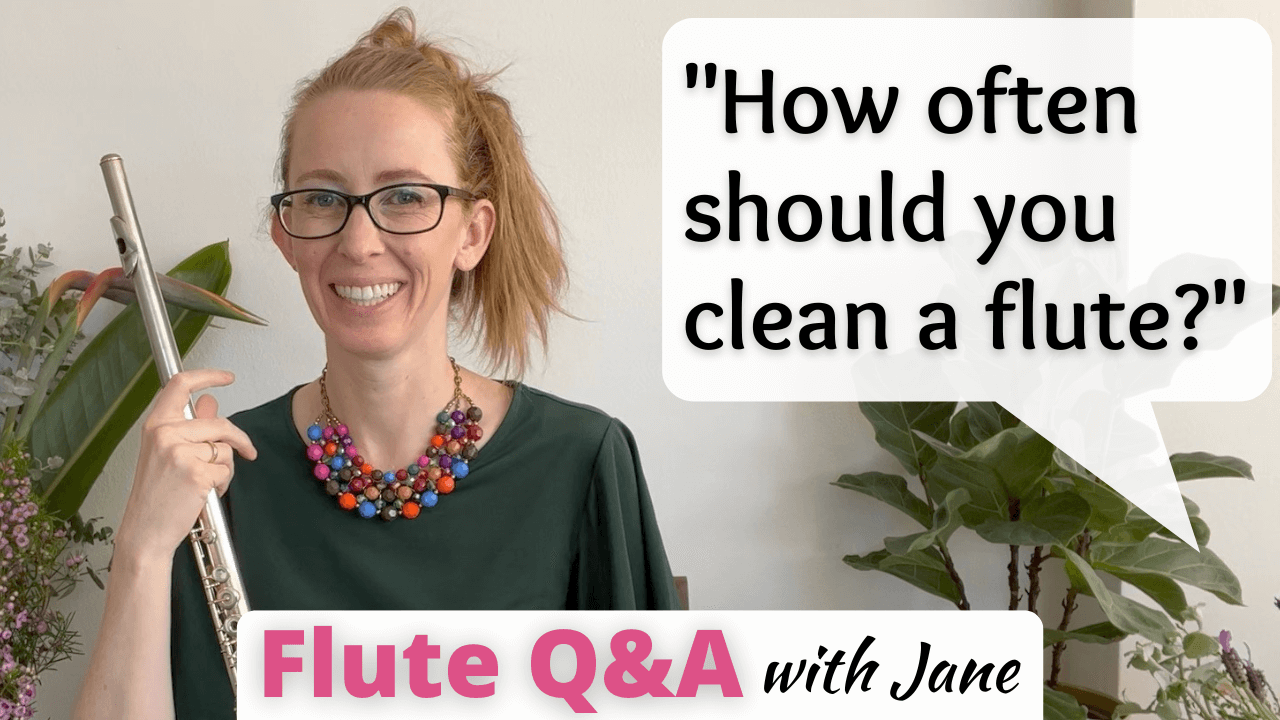 Flute Q&A #39: How often should you clean a flute?

Nikki asks for Flute Q&A 39, how often should you clean your flute? Well, of course, clean the inside of your flute after every time you play, to remove the moisture. But did you know there are really 3 parts to cleaning your flute?

How often should you clean a flute?

If you're wondering why your flute "dribbles", watch this video here
And if you'd like to know how to clean out "spit bubbles" like Nikki mentioned happens to her flute regularly, watch the video here

As a little overview, we can sort of think about cleaning the flute as having three parts to it. So the three parts are cleaning the inside with a gauze. I know that looks gross and dirty, but trust me, it's washed and a cleaning rod. The second part is cleaning the outside of your flute with a polishing cloth. And the third part, which you mentioned Nikki, is blotting the pads that you said. And we use cigarette paper for that. It's really thin absorbent paper.

Clean flute after every practise

Get rid of moisture in flute

So the reason behind this, is if you play the flute and you have a look inside this hole or up the end, or you take off the head joint and you have a look in there, if you see any moisture at all, you want to get rid of that moisture. You want to get rid of most of that moisture. And the way you do that, as you probably know, but I will demonstrate just in case.

Now a lot of people take it out and go, but I can still see a little bit of moisture and it's really bothering me. It doesn't matter. As long as you get most of the moisture out, it's fine. You just don't want moisture hanging around in your flute while it's closed inside the case because it will go mouldy and mildew and basically stink. So that's kind of gross. Definitely gross.

If you leave your flute out on a flute stand, which I've got my flute on here like this,  I don't clean the inside of it because it dries in the air dries naturally. So it's really only to prevent the moisture hanging around inside a closed flute case.

Okay, so Nikki, I know you know that already because that's what I talked about in flu Q and A number 31. The reason I didn't mention cleaning the outside of your flute with a polishing cloth is because I never do it <laugh> because I think it's got something to do with the fact that I love teaching technique of the flute.

Proper technique of the flute

Oh, my name is Jane, by the way. I don't think I said that. I love teaching proper technique of the flute. The little tiny movements of your embouchure, the little tiny adjustments to your body, your hands, your position, your practice technique. I love teaching this. This is what the nitty gritty is that instantly improves someone's flute playing.

Flute tarnishes if left out

And as a result of that, I don't care what my flute looks like. A lot of people do care what their flute looks like. And that is to be admired. Part of me wishes I was a little bit more like than that in - so it's 2022 now, during lockdown you can see my flute tarnished a lot. Have a look at the black on my flute.

When it's in the flute case, if you have a, I'll show you a silver protector strip or an anti-tarnish strip that you can get from jewellers, by the way. So a jewellery shop sells these, looks like something like this. Sometimes it's a different shape. That stops your flute from tarnishing while it's in the flute case.

It doesn't remove the tarnish, it just stops tarnish forming.

So if you want a shiny flute and you want to stop it from tarnishing, either keep it in the flute case with an anti-tarnish strip or you can use this. It doesn't make it shiny but it does keep sort of grime off it and it does help with tarnish not forming.

Micro-fibre cloth for the flute

So this is a - oh my god, sorry, I can't speak. This is a polishing cloth. My cloth does not have polishing chemical in it. You can get cloths that are impregnated with chemical silver polishing. I don't use that because if you have a silver plated flute or a flute that's plated in anything silvery coloured, if you use those cloths that have the silver polishing and makes it instantly shining, like oh my god, it's amazing.

It's actually taking a slight layer off your plating of the flute and eventually it will wear through that plating. So it's better to use a polishing cloth that doesn't have polishing chemical in it just to look after your flute.

Polish outside of flute with cloth

Now, my flute is not destined to stay black like this when I get it serviced in the next few weeks actually, cuz it needs a service. It's just due for service. He will shine this up and it will look like new again. So you may like to look after the outside of your flute with a polishing cloth which is great. Makes it look, keep looking shiny.

Now the other aspect to your question Nikki, is the keys that have - what were your words that you used? Often sticky and various pads are often soaked. Okay, so you might be wondering why on earth would you have moisture coming out of your keys on your flute?

Actually, I have done two videos in the past few years about this and I'm gonna put a link to both of them below for you Nikki, to watch or anyone else who's interested in them. One of them is called Why does my flute dribble <laugh>? And the other one is How to get rid of spit bubbles.

Spit bubbles is my term for when you are playing along and one of your keys, let's say this bottom D sharp key, you press it down, but a bubble of condensation seals this hole. So it sounds like the key's not open even though you've got your finger down. So that's what I call a flute bubble.

And in that video I teach you how to use cigarette paper to remove the spit bubble. The reason I don't do that regularly, Nikki, and the reason I didn't in even mention it is because my foot doesn't get spit bubbles very often. Maybe once every few months I'll be playing along.

Humidity can cause flute spit bubbles

There's certain atmospheric conditions, temperature, humidity, etcetera, that cause spit bubbles to form. Of course, when you've been playing for longer, they're more likely to form. I don't know why I don't get them very much. It's not specifically me and it's not specifically my flute. I think it's probably the environment that I live here in Sydney. Even though Sydney is quite humid. I don't know why, but I'd find that they don't form that often.

So you can watch those videos and I'll show you how to use cigarette paper to remove spit bubbles. And the other thing that you can do, <laugh> slightly less elegant, but you open the key where the spit bubble is formed and you just blow out the spit bubble and it instantly gets rid of it temporarily.

That's when you're playing and you're like, oh my God, I have a spit bubble. You do that and it's gone. You see oboe players do that a lot. They blow into their instrument and clarinet players.

So to answer your question Nikki, about how often I do those things, the outside of my flute - never <laugh>. I had to go and rummage through my cupboard to even find this cloth. I knew I had one. I've never used it. So my flute’s a few years old, I've literally never used this cloth, which is kind of hilarious.

I was gonna be self-depreciating and say that it's slack of me, but it's actually not slack. It's just that I have a real interest about the technique,  the way the body works for playing the flute and tiny adjustments that you make to make your flute playing instantly better. Like, I just love that I'm obsessed with that. And for some reason, I don't have the brain space to clean the outside of my flute.

Clean the inside of your flute every day. How often do you do this? As needed. So there you go. Now, if you would like to have a beautiful looking flute, but also a beautiful sounding flute, and you would like to improve your tone, join me in the free mini course and I'll show you over three days a small technique change or an adjustment every day for three days. And it instantly, no kidding, instantly improves your tone.

So if you'd like to do that, come and join me for free. Otherwise, I'll see you in the next Q and A. See you later.