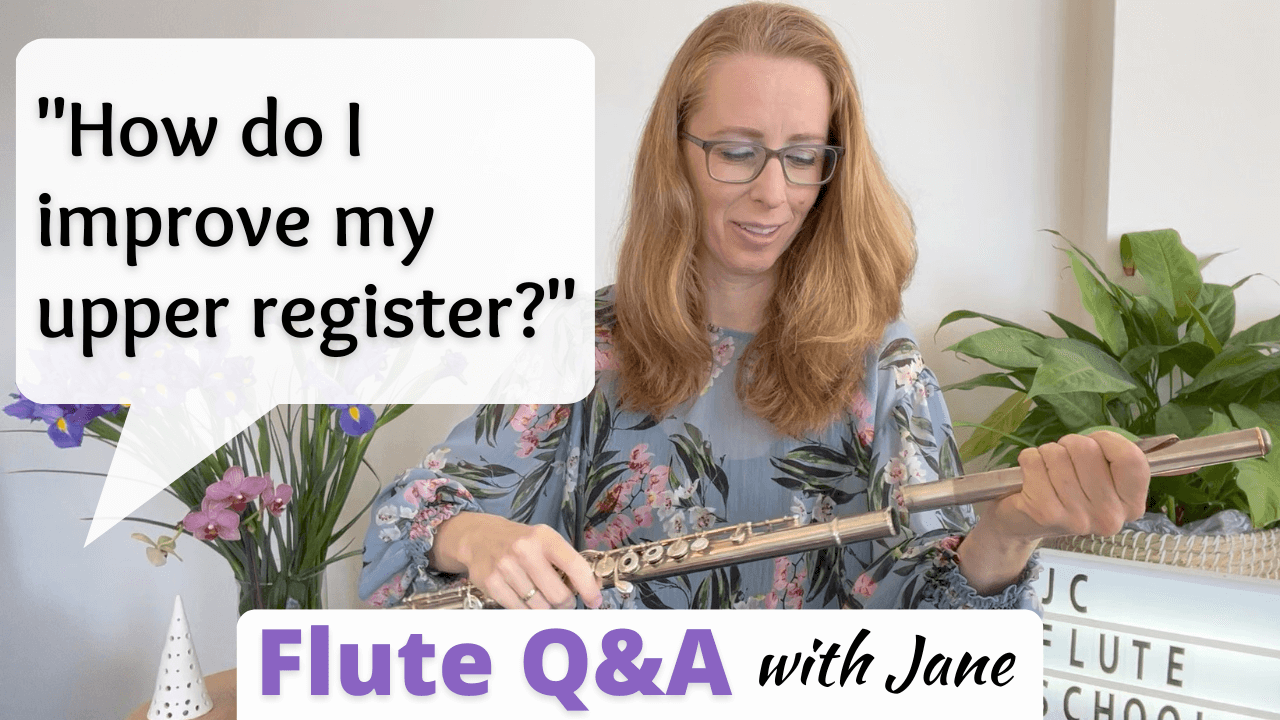 Flute Q&A #40: How to improve your upper register on the flute

In Flute Q&A 40, you'll learn how to improve your upper register on the flute, like an easier high E and stop getting breathy, unclear notes and start getting a clearer tone - with no occasionally squeaks!

How to improve your upper register on the flute

Marc - the video for you called 4 Reasons Why Your Tone is Fuzzy can be watched here
The 3-day flute embouchure course (called How to Instantly Improve Your Flute Tone) can be registered for right here
To find out more about joining The Flute Academy, check it out here

Improving high notes on the flute

Welcome to Flute Q & A Number 40. We've got a great question today from Mark. He says, oh, and then I have a funny comment that someone wrote in the Q and A. Someone wrote a comment and it made me laugh. So firstly, Mark wrote, how do I improve my upper register? I'm struggling with high E and it's breathy. Oh and breathy, unclear notes and occasional squeaks. Also, I loved your 3-day embouchure course. Cool.

Okay, so I'm gonna answer your question Mark. And I'm also gonna put my flute together, not a great multitasker. So I'm gonna focus on doing this and then I'm gonna read you the comment from Dan. Dan left a comment and at first, I saw it and went, oh, I think I've offended someone. And then I realized he was joking.

Dan says, hang on, just move this microphone towards me. Dan says, oh, a bit of preamble. I recorded a Flute Q and A and I mentioned that a jackhammer had just started up across the road. So Dan wrote, it seems as if you have a bad attitude. That wasn't a pesky jackhammer in the background. That was a modern flute and jackhammer duet <laugh>. That made me laugh. Thanks Dan.

All right, so Mark, your question about your high register, your high octave and your breathy, unclear and squeaky notes. Yes, I have some answers for you. All right, so it goes like this. Let's demonstrate what Mark is talking about.

So high E that he's talking about. I can only imagine that's the high E because it's a notoriously difficult note on the flute. Notoriously difficult that is, unless you have something on your flute called Split E mechanism, which is a bit of a fan-danged, little extra thing that you get when you are purchasing your flute new. It's sort of, it's built into the flute.

Stability on high E for flute

Unfortunately, it then makes high F sharps feel harder. By comparison, they're harder to your now easy high E's. Split E mechanisms are wonderful. I love them because it's just a bit more stability on that high E, but you definitely don't need one.

Now if you don't have one, don't go out and buy a new float <laugh> because if you learn about using proper technique to get your high notes. Improve your embouchure that improve your high notes in that order, you will find that you can play a flute without a Split E.

Anyway, the reason I'm doing this, every time I say high note technique, I elaborate in a second. Okay, Mark, you said you're struggling with high E. Okay, we've covered that. Sort of. Breathy, unclear notes and occasional squeaks. Okay, so breathy, it's probably cause the hole in your mouth is too big. That tends to make breathy notes like this- is a good size hole. <sound> is too big.

Now don't worry that you can't see my mouth in detail, but you can hear the breathiness. So good size hole, so small. And big size, big hole. You also run out of air so that can cause breathy notes. Unclear notes, which I know is like a variation on breathy notes. So unclear can be let's say like that. Sort of like a thin sound rather than breathy sounding. And you heard there were some squeaks in there too.

The main reason for unclear notes like that is tension, but it can also be a big embouchure hole, too big an embouchure hole as well if it has that breathy sound to your unclearness.

Now the squeaks that you mentioned and you heard it in that example there like this- If you go too high and you don't want to, is tension. There's no other way you can squeak like that without being too tight in your embouchure. So, Mark, it's great that you liked the 3 Day embouchure course. It's free by the way. Anyone watching this who would like to do it, go to www.flute.school and you can sign up for the free course there.

So Mark, that's excellent. It sounds like it's gotten you on the right track, which is good. The next step after that is the Flute Academy. It's the program that I run. The first module is Embouchure. It's the 3-day free flute embouchure course. It's called How to Instantly Improve Your Flute Tone In 3 days. It's like an intro into the first module in the Flute Academy. It works on fixing your embouchure completely.

And now deliberately in this order, the second module is High Notes and it teaches you that specific high note technique. You know, the one I was doing this for. It's because it involves a tiny movement of the corners of your mouth pushing forward rather than pulling back. It's something that a lot of amateur flute players don't realize.

They think they need to squeeze for high notes, but actually, the opposite is true. They need to unsqueeze and use their embouchure in a particular way to make the high notes come out. But you have to fix your embouchure first, which is why the embouchure module is first. And the High Note module is second.

Now there's 9 modules. It's called the 45 Day Flute Transformation. It's a course within the academy. Nine modules includes things like faster fingers and breathing. So the first two are particularly relevant for everybody because it's the absolute foundations of getting a good tone. And then Easy High Notes. So you can go check that. I'll put a link below for the Flute Academy if you'd like to look at it.

Now, the other thing that might help you Mark is there's a, I'm gonna put a link to a video for you called The Four Reasons Why Your Tone Is Fluffy. Now, I would suggest you go and watch it.

To give you a little brief overview. The four reasons are  Break. What did I write? Oh, <laugh> didn't understand my own handwriting there. One reason is if you've had a break from flute playing, you can be fluffy when you come back. That's not, I don't think that's your case.

Number two is tension. Definitely your case because you're squeaking. Number three is if you've eaten something that makes your mouth dry or kind of squeezy and weird food like lemons, I find that does that to me. Sometimes dairy, I don't think that's your issue either.

And then the fourth reason is your flute embouchure are being too big. The hole being too big, which I do think is your embouchure which you would've discovered in the free course, the 3-day embouchure course. So you will have discovered that as well in that. Go watch this video on the four reasons why your tone’s  fluffy, and I think it will shed some more light on this for you.

Guess what? My name is Jane Cavanagh. I didn't say that at the start. My name is Jane. I'm a flute teacher. It's been great to have you in this Flute Q and A and I'll see you in the next one. Bye.